Television rights are one of the biggest factors in football clubs’ profits: on average, teams in Europe make up 40% of their total revenue (8% in Russia). And while the situation with the new broadcaster is heating up in our football, we will tell you in a short series of materials how this market is organized and the distribution of income in the top European leagues.


RPL may grant broadcasting rights without a tender. Because it is bad for Russian football

Collective model instead of individual

Until April 30, 2015, in La Liga, the sale of rights took place on an individual model – the clubs were independently looking for who would broadcast matches with their participation, which is why the income difference between Real Madrid and Barcelona and other clubs was huge.

The single sales model, which has been in place since the 1997/98 season, has been repeatedly revised by the courts and the Spanish competition authorities – the relationship between the many agents involved in the TV rights market and the clubs has been heating up, which has caused controversy. The second important condition for global change was the crisis that hit Spanish football: at the end of the 2011/2012 season, the total debt of 42 professional teams amounted to about 4 billion euros.

After analyzing the situation, Spain developed and approved Royal Decree 15/2015 on urgent measures regarding the marketing of audiovisual rights for professional football events. The new law regulates three key points:

– the National League (first and second division) and the Spanish Football Federation (Super Cup and Spanish Cup) will have to deal with the search for the broadcaster and the sale of rights, while following the rules of fair competition when choosing a contractor;

– The distribution system of television rights will be changed to reduce the gap between “rich” and “poor”: the distribution will be net profit (ie gross income minus management and marketing costs), 90% of which will be allocated to the distribution among the clubs of La Liga, 10% – Segunda. Each team in the first division receives a fixed 50%, 25% of the payouts depend on the position in the standings (the result for the last five seasons is taken into account, each position, just like the year, has its own rate), the rest 25% is distributed according to the concept of social influence. There are two criteria for this: 1/3 based on the average season ticket and the club’s tickets over the last five seasons, and the remaining 2/3 based on the contribution to the value of the TV broadcast in terms of the audience it attracts.

– after the distribution of the income, each participating institution must pay a mandatory contribution to the Sports Compensation Fund.

Spanish media wrote that it was “a decree that took football out of disaster” and the chairman of the Supreme Sports Council (CSD) Miguel Cardinal a year after the law was passed, he acknowledged it was “the best reform in the history of professional football in Spain”. “Our revenues are high enough to cover the social security of top athletes, maintain financial consolidation and competitiveness in football and remain at the forefront of Europe,” Cardenal said in May 2016.

The war for media rights and the inflated bubble

Royal Decree 15/2015, inter alia, prohibits the same natural or legal person from acquiring (directly or indirectly) exclusive rights to broadcast football matches. The exception is the absence of a bidder or equivalent offers.

The first auction took place in 2015: TV rights for the period from 2016 to 2019 were shared between two media giants – Telefónica and Mediapro. The first company won a La Liga match in the first qualifying round for 750 million euros (ie the opportunity to choose any match), the second – the remaining eight games for 1.9 billion euros. And then the war started.

Even before the Royal Decree was passed, Telefónica bought DTS (Canal +), which increased its stake in pay-TV to 80%. As the monopoly is banned, the National Market and Competition Commission (CNMC) approved the agreement with one condition: the government agency asked the company to sell at least 50% of its premium channels to competitors. 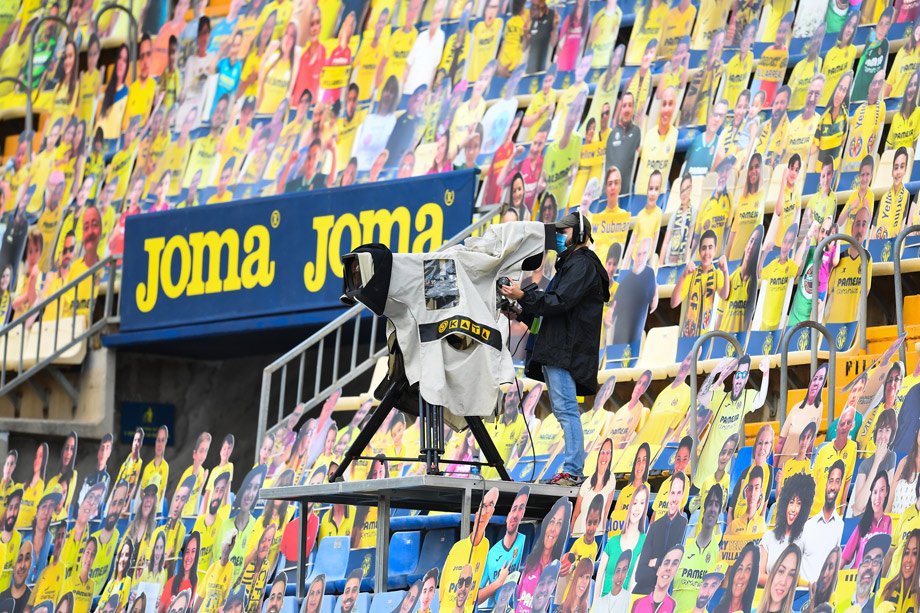 Mediapro showed its matches on the beIN La Liga subscription channel and at the beginning of 2016 provided it exclusively to the provider Movistar (a subsidiary of Telefónica) until the end of the 2018/2019 season. At the same time, DTS Telefónica has agreed with Mediapro that its customers will have access to games appearing on Mediapro BeIn Sports, a € 2.4 billion deal. On the same day it was announced, Telefónica’s main competitors – Orange and Vodafone – publicly expressed their dissatisfaction and asked to intervene in the CNMC case. And the supervisory body came up with a confrontation: Telefónica, under previous obligations, could not acquire exclusive rights to the transmission channels created by other companies, so the terms of the agreement had to be revised. This forced Mediapro to negotiate with other companies.

“Now the question is whether other telecommunications providers have the money to pay for such a large package of broadcasting rights,” the then President of Mediapro sighed. Jaume Roures. – Telefónica was the best choice. In the case of Vodafone and Orange we are not talking about small companies. They will get football if they offer the right price. “No one can force me to buy something for 10 and sell it for five.”

Orange and Vodafone acquired the rights to the eighth lot during the competition in December 2015, which includes the broadcasting rights to bars and public venues in the Li League, Segunda and Spanish Cup. But they wanted more – and decided to fight to the end.

The rights in La Liga are divided into lots: the fourth, for example, includes only one game per game free or pay-per-view pay-per-view, as well as six playoff games for promotion to La Liga and not exclusively the highlights of all meetings. The fifth is the La Liga TV channel: it includes eight games each La Liga match for pay-TV on an exclusive basis with a third option. The first, the second, the third are free lots in the air. The thickest batches are the fifth and sixth. acquired by Telefonica and Mediapro at the time.

In April, everything was settled: Orange, Vodafone and Telecable agreed in an agreement with Mediapro, agreeing to pay less than 200 million euros per year for the rights.

Vodafone has acquired the right to broadcast eight La Liga matches a day on the channel and on the OTT platform, including at least 18 matches between Real Madrid and Barcelona. Orange made a similar deal and the companies were missing only one thing – the main match of each game day, El Partidazo, whose rights belonged to Telefónica. To complete their sports package, the pilots had to either start negotiations with the media giant or complain to the CNMC – this was not the first time for them.

In this war, Telefónica proved to be the loser – Orange and Vodafone continued to claim the rights to El Partidazo. Despite the company’s efforts to maintain exclusivity, CNMC has repeatedly opposed and abrogated the content monopoly, with the three largest telecommunications companies offering similar sports packages for three years.

In 2018, a new auction was held – already for the rights from 2019 to 2022. This time, Telefónica surpassed Mediapro, taking the basic package for eight races and El Partidazo for 2.9 billion euros for three years. The former competitor got a package for broadcasting in bars and one match a week for 480 million euros In total, the television rights amounted to 3.4 billion euros, which was the largest deal in the history of Spanish football (15% higher than in 2015 ). Vodafone has withdrawn from the race: according to the company, the cost of telecontracts has been artificially inflated to such an extent that it makes no sense to participate in it. Orange remained – the channel acquired a secondary license from Telefónica for 300 million euros.

Commenting on the agreements, President of La Liga Javier Tempas “I’m pleased that this result is positive for everyone directly or indirectly involved in the Spanish football industry,” he said. Tebas also added that he wants to close the financial gap between La Liga and the Premier League – according to his expectations, this will last for about 10 years.

The next competition is scheduled to take place this autumn and is expected to include a series of new packages, each designed to introduce new broadcasters to the Spanish market. In addition, La Liga plans to involve Amazon in deals – the platform previously bought a package for 20 Premier League games.

i How much does football cost in Spain this season?

Movistar: Fusion Selection package (for selection from La Liga or Champions League matches), which includes Internet with a speed of 300 Mbps and mobile communication with unlimited Internet – 95 € per month. Fusión Plus Football package, which includes all football matches, 1000 Mbps fiber optic and unlimited mobile internet – 120 € per month.

Money that came to the clubs 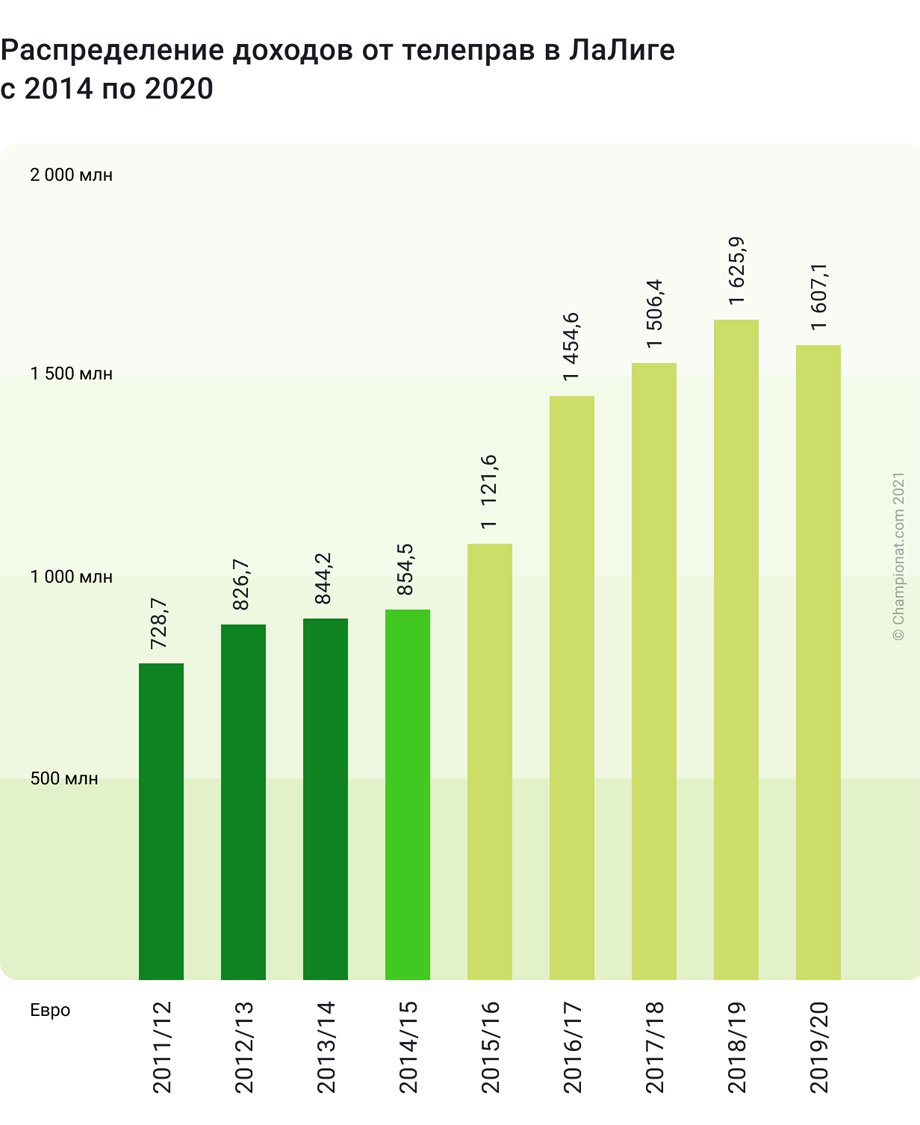 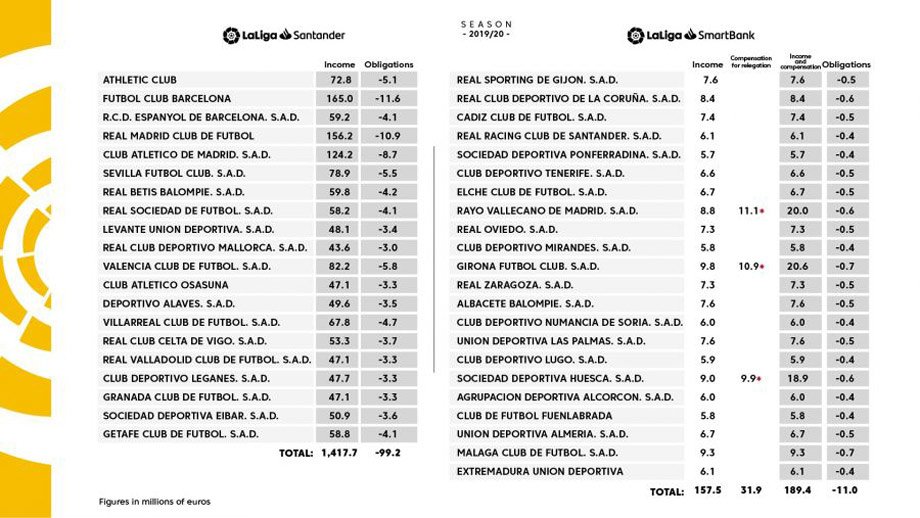 How did the money received affect the small Spanish clubs? They not only had the opportunity to invest more in the development and marketing of young people, but also to behave more boldly in the transfer market: to buy more expensive players, to offer them higher salaries. By the summer of 2019, the Las Palmas underdog could afford Loika Remy from Chelsea, Betis Christiane Tello from Barcelona, ​​although three years earlier they simply did not have the resources for such agreements.

It is difficult to say whether the cost of the TV rights will increase significantly for the next round, but one thing is certain: Tebas is very convinced of his idea of ​​bringing La Liga closer to revenue at the Premier League level. And while he is obviously on the desired path.