Dynamo in the 23rd round arrived in Krasnodar in a difficult and logistical way. The airport is still closed, as are many airports in the south. Therefore, the team traveled through Stavroupoli. But some players found it much harder to acquire. Paraguayan Balbuena, one of the key players in the current Dinamo squad, went home during the break for the national team matches. He played two whole games there – the second was on March 30th. He did not manage to transfer to Stavroupoli. But I wanted to play! So I went this route. Move your finger on the map and count the hours:

That is, the net travel time was 31 hours. However, we did not count transfers, waiting, registration, passport control, etc. Everyone flew, we all know how much to add.

Sandro Schwartz could not help but put him in the starting lineup:

– I want to especially thank Fabian Balbuena, who made a very long trip to Krasnodar, returning from the national team. “We decided that today he will be in the starting lineup”, he said before the match in an interview with TV people.

STATISTICS FOR AND AGAINST

Opta Sport reminded: Dynamo beat the Bulls for the fifth consecutive game in the RPL. Before that, only Spartak and Zenit managed to do it (they both had a winning streak starting in 2011).

Before the game, Dynamo’s statistics were rather depressing: the team had a very difficult time after the break. For a month and 19 days, you have to play 9, 10 or 11 games (depending on how far Dynamo will reach the national cup).

The composition of the teams was not unexpected: in the context of its staff problems (due to the mass flight of foreigners), almost everyone who could leave Krasnodar. The 19-year-old Nigerian debutant Olakunle Olusegun may have seemed unusual in the attack. Smolov started from Dynamo (although many believed that more time should be given to Tiukavin, who had distinguished himself for the national team). Diego Laxalt played on the left side of the defense, Skopinchev appeared just towards the end of the match.

Dynamo started as if they were playing at home. In general, it is very strange because in the first 10 minutes the ball did not end up in the home of Matvey Safonov.

In the 10th minute, Krasnodar definitely had to stay in the minority. But then the referee started making jokes, which later became the main character of the match. For the first foul, Oleksiy Sukhoi showed a yellow card to Nikita Krivtsov, but left the second, much more serious, not careful.

When it seemed that the “bulls” had recovered and were preparing to equalize the game, Dinamo had to open the score. Arsen Zakharyan confidently shoots from his left foot, right from the penalty spot (this line would later become one of the heroes of the first half), but Safonov miraculously caught the ball and did not throw it in. at the end, but in the suspension. In this episode the hosts “rebound”.

And now the penalty line becomes one of the characters of our drama.

Smolov had the ball in the opponent’s penalty area, but tried to pass Chernikov to leave the penalty area and get better space to hit or continue the attack.

The referee did not notice Smolov, who was caught by the defender. But when the defender honestly snatched the Dinamo player from the shirt, he could not remain silent. 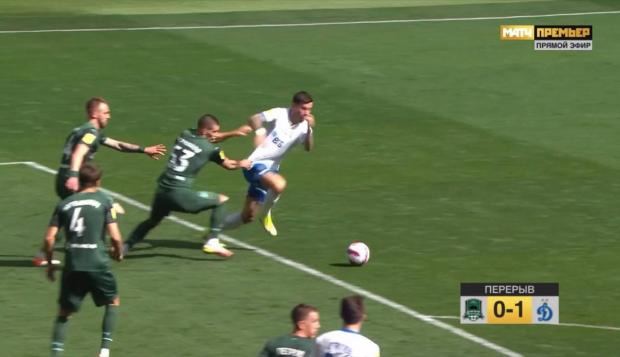 At first it seemed that he was free. The VAR intervened – and it turned out that the offense (not crossed legs, but an attempt to hold Smolov for a shirt) was on the penalty line. The line is also a penalty. If you take a closer look, everything is visible on the screen.

THE BULLS COULD ESCAPE

In the second half, Krasnodar was sharper. The team started to get more and more opportunities to score, but the hosts did not have enough strength for both defense and attack, so Dynamo could punish the hosts who returned late several times. Denis Makarov had at least two 100% chances and only Safonov’s confident play saved the hosts from defeat.

And surely Krasnodar’s team had to be saved in the final seconds: Ionov went head-to-head with Sunin, but Simansky somehow managed to catch him. But instead of a penalty, Sukoi showed a yellow card to Ionov, considering his behavior a normal simulation.

“Dinamo” craves “Zenith” again and gets away from competitors who seemed to be stepping on their heels. The difference from the stumbled CSKA, which escaped from the penalty spot only in the 6th extra minute – 3 points, from the next pursuers – 8 and 9, respectively. And Zenit should get its traditional “strange” three-pointers from its faithful. “Classmates” – St. Petersburg “Dynamo, which in recent years plays under the name FC Sochi.

Dynamo’s game is already becoming a real champion. But whether the team will have enough strength to finish is a big question.