In the XVI century. There was a revival in the handicraft production of Azerbaijan. Many weavers, blacksmiths, coppersmiths and potters worked in towns and villages. Cities such as Tabriz, Shamakhi, Baku, Ardabil, Julfa became the centers of handicrafts and trade.

In the 17th century Pottery remained one of the main crafts in Tabriz, Ardabil, Samaki, Ganja and Baku.

Until the 19th century, pottery, continuing the traditions, among other crafts, took a leading position in the villages and in a number of cities of Azerbaijan. Its main centers were in Guba, Shemakha, Goychay, Lankaran, Nukhin (Sheki), Nakhichevan, Elisavetpol counties.

According to Day.Az with reference to Azerhistory, the traditional ceramic products created by Azerbaijani craftsmen were generally distinguished for their diversity. Of particular interest are the containers for the preparation, storage and processing of food.

The composition of the kitchen utensils included boilers (“tsolmek”, “gazanza”) of different sizes with lids. The ceramic cauldrons of different ethnographic zones of Azerbaijan differed little. In southwestern Azerbaijan, the pottery itself was called “Cholmekchilik” due to the fact that these cauldrons accounted for most of its production. 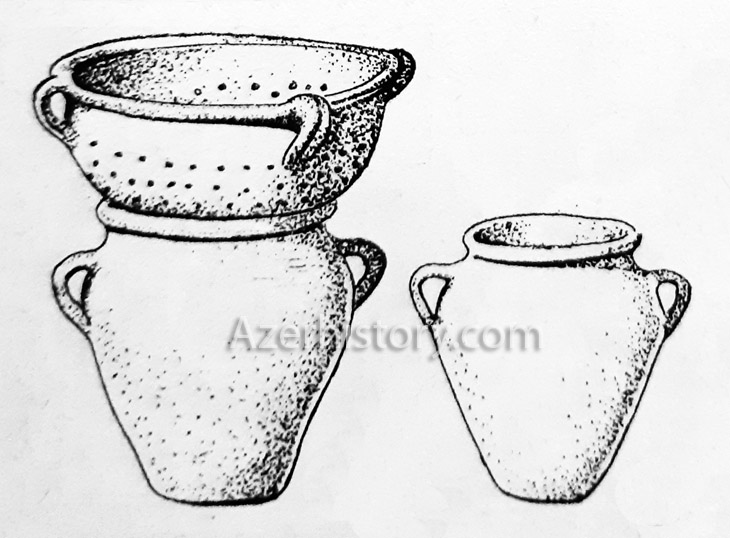 “Cholmeks” were widely distributed in the Lankaran-Astara zone. The main food product is rice, here they were cooked only in such boilers. The slow heating of the thick walls of “cholmek” gave the rice a special taste. The “Cholmek” had a hemispherical shape, a lip bent outwards. The capacity of the boilers was different, from small (for 1-2 people) to large (“mejlis gazana”).

The widespread use of such cauldrons in the past is evidenced by the fact that they were quantitatively superior to other types of medieval glazed ceramics. As a result of archeological excavations in Beylagan of Gabala, they were discovered in large numbers. The originals of the later “Cholmeks” were also found in settlements of an older period. Thus, at Yastytepe in the Gazakh region, such Gray and Black Bronze Age cauldrons were discovered, with a slightly curved rim on the outside. Also found in Mingachevir.

Cauldrons similar to “Cholmeks” were found in the layers of the 10th-11th century. at Orenkal (15 km northwest of Beylagan). In the Gumba zone, special jugs (“kuvehs”) were used to cook beans in buns. The “cuveches” were made by women. “Kyuvech” – a jug with a handle with a large drain and a flat lid. A feature of such jugs was the relatively large (up to 2 cm) wall thickness, due to which the food in them seemed to be steamed.

This type of jug was so common that after the appearance of metal pans in this area, a proverb appeared: “I will not break my jug when I see a pan”.

The materials of the field, the abundance of the fragments of kitchen utensils among the archeological findings suggest that the great need for this was explained by its fragility. Kitchen utensils were made not only by craftsmen and potters, but also by women, and by hand, often using techniques for making tenders, even from the same clay.

With the advent of pottery centers, the production of kitchen utensils was greatly reduced, as it was gradually replaced by factory products. The exception was the “piti gab” – flat-bottomed jugs of small capacity (a little less than a liter). They were used to prepare a liquid dish with meat, widespread in cities and villages. 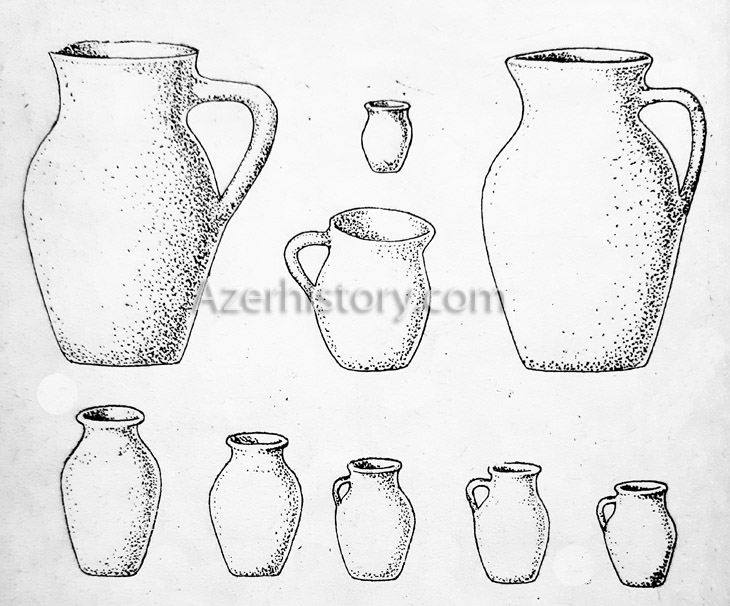 “Piti gaby” was called differently in different ethnographic zones: in Sheki – “pitidopusu”, in Shirvan – “dopu”, in the Lankaran-Astara zone – except “piti gaby” and “piti bernisi”.

“Piti” – a complex and delicate dish prepared in a separate jug for one, two people and the whole family. Depending on this, piti gaba of different sizes were used. The reason for the long-term preservation of mass production jugs for “piti” is explained by the wide distribution of this dish in the culinary arts of Azerbaijan and the violation of its taste when cooked in dishes that are not ceramic.

To make a dish as well known as pilaf, ceramic drills (“ashsuzen”) of various sizes were used. In the Guba zone it was called “suzek”, in the villages Separadi, Shaglakuja, Pensar – “plovparzyn”, in the Sheki and Shirvan zones – “chilovsuzen” (“chilov” – boiled strained rice). The shape of the holes in all the ethnographic zones was similar – hemispherical with holes and all over the bottom, with a recess of several centimeters from the edges. 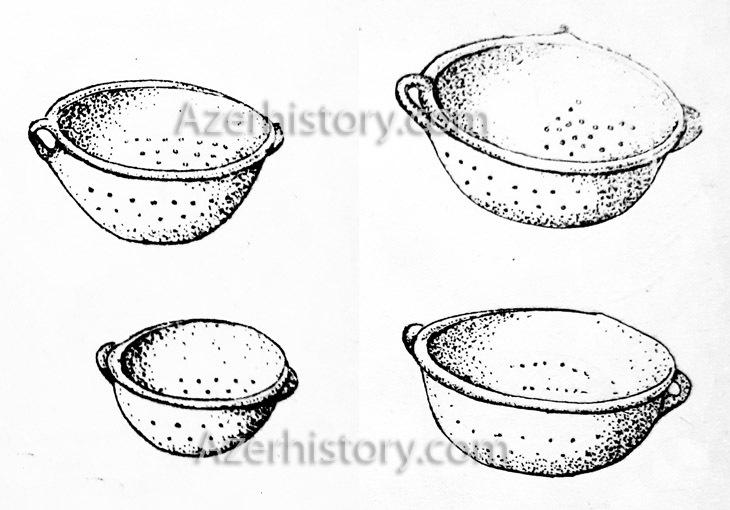 In those places where drained rice broth (“helim”) was served before the pilaf, it was pierced in special ceramic pots (“helim gaby”), which were made in pottery centers. “Helim gabi” – a bucket-type jug with a wide mouth with two handles on a hanger. 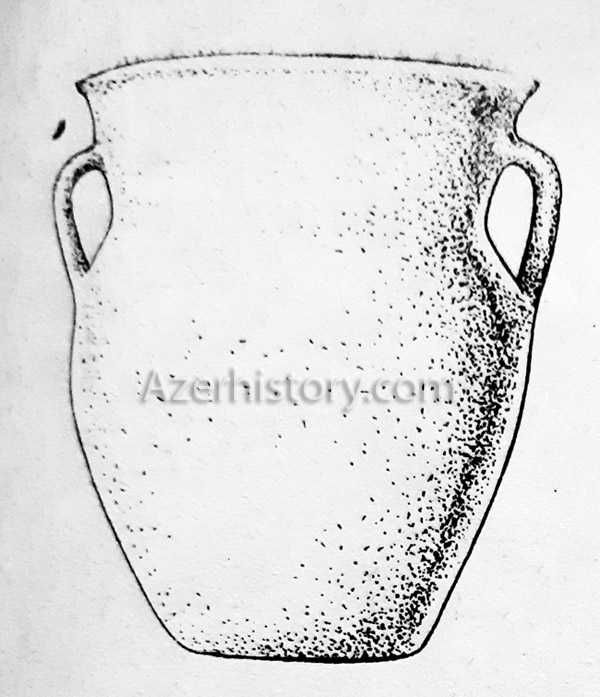 The ceramic lids corresponded to the sizes of the vessels. For small vessels, they were usually made massive, concave, in the shape of a cone. The handles of such caps in the form of rings and nails were placed in their center. A variety of lids for cauldrons, cups and other vessels were discovered by archaeologists in layers from different eras.

Disc-shaped lids were characteristic of the Kuro-Arak Kültepe I, Babadervish culture. They were mainly used for small bowls, cups and jugs, as evidenced by the disc-shaped lids found along with vessels.

Flat lids dating from the 12th-13th century were found in Ganja. Bell-shaped covers were found during excavations in the feudal cities of Gabala and Beylagan.

All the lids found during the archeological excavations had a rim for a tight cover. Bell-shaped lids were later used for boilers. The shapes of the traditional lids were repeated on later metal utensils. Most of the copper caps (“serpush”) in Azerbaijan were also bell-shaped. In Azerbaijan, the term “serpush” was used only for the copper lids used to keep the pilaf warm.

Ethnographic data show that in Azerbaijan the tradition of cooking food in ceramic pots is ancient and probably began at the time when cooking was done by fire. Many ancient vessels found during excavations often had a pointed bottom. Later, some types of kitchen ceramics were made with a rounded bottom for better heating and durability.

Ceramic hearths of Azerbaijan in the 19th century. met mainly horseshoe-shaped. The height of their walls reached 30-35 cm. Low protrusions were made along the upper edge, at the cutting edges and in the center so that the boiler that was placed in the hearth did not fit tightly at the edges of the base and so that there was space for sinking and the flame could cover a large area of ​​the boat.

Archaeological excavations in Azerbaijan, particularly in Nakhchivan, Fuzuli, and near Gazakh, have uncovered round-shaped, triangular, and non-protruding, horseshoe-shaped, horn-shaped, and cylindrical ceilings.

The horseshoe-shaped ceramic coasters from archeological sites were made mainly of clay with a large mixture of sand and were smoothed on all sides.

For the economical use of fuel, especially in cities, a ceramic brazier was used for cooking food and heating homes. Unlike the open hearth and fireplace, ceramic coals created the best conditions for cooking, so they were considered one of the important elements of urban cuisine. In such an oven, not only was less fuel consumed, but the heat was retained longer, there was less soot.

As for the braziers (“braziers”), the potters continued to make them with high sides and legs for hookah kebab, which is widespread throughout the Caucasus, and other meat dishes on the spit. Fragments of ancient mangals were found in the Ganjachay area, in Mingachevir, in Sarytepe, Uzerliktepe, Karatepe, Yastytepe. 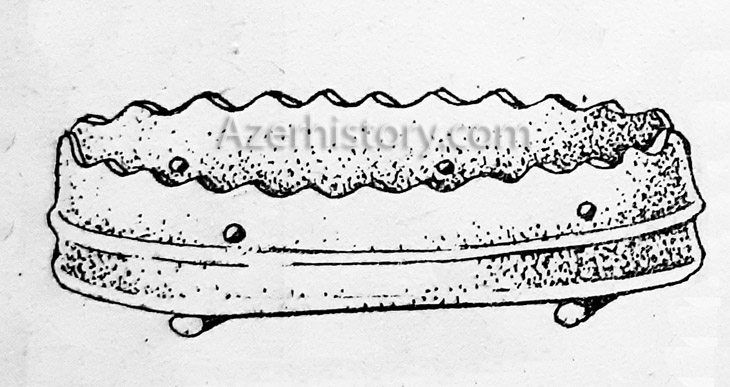 For baking bread in Azerbaijan, not only baked from the inside, but also ceramic ovens dug in the ground and above the ground (“tandir”) were used. The ancient awnings in Azerbaijan date from the III-II millennium BC. μι. Such stretches were found during archeological excavations in Kultepe, Uzerliktepe, Karatepe, Orenkala, Gabala. 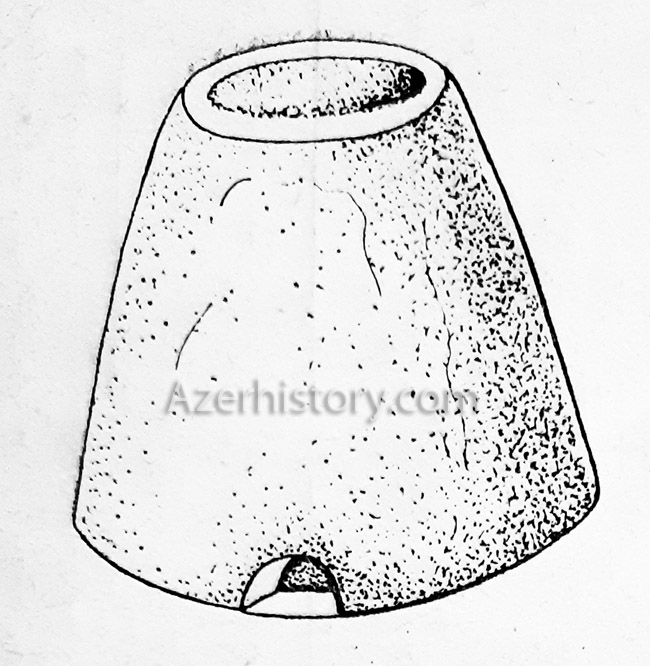 Ethnographic observations show that the women were engaged in the construction of tents, as well as other ceramics for baking.

Breads, cakes and some types of flour were baked in ceramic shawls. It was round in plan, slightly convex tile up to 3 cm thick, on a special hearth base. Some researchers believed that the saz was the first bread machine. In Azerbaijan, ceramic saz was also used in Soviet times, especially in the Gumba zone. To decorate the bread, they often used ceramic stamps (“kulchebasan”) with different ornaments. 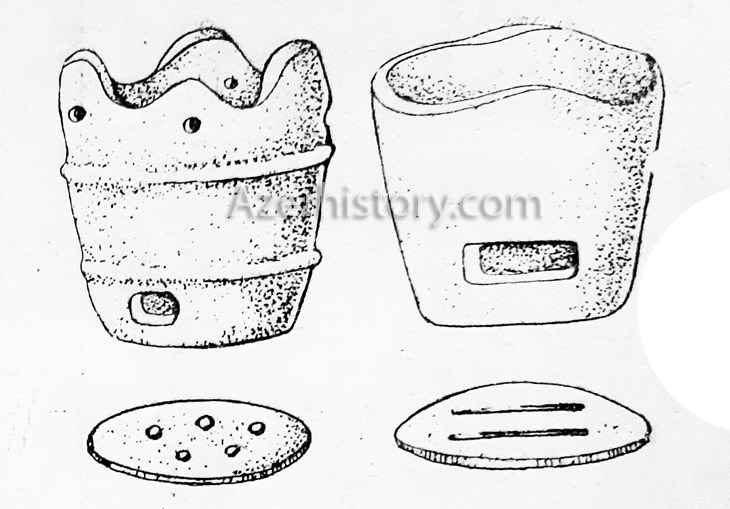 Large jugs (“cups”) were often used to store and process food. They poured cereals, flour, stored meat fried in greasy tail (“govourma”), salted fish, prepared pickles and marinades. Later, the production of such kyups decreased, they were mainly made to order. Kyupas have long been distinguished by volume (“batman”, “kirvenke”) and were called by traditional weights.

Larger kyupas could hold up to 150 liters. Depending on the volume, sometimes it was without handles and with handles (up to four). The construction of kyups with four handles was typical for the Guba belt. In contrast to other ethnographic zones of Azerbaijan, in the village. The Separadis of the Lankaran region used large kyups mainly as containers for salting fish.

The smaller jars (up to 50 liters) had three handles and were often used to store various pickles and molasses. In the Lankaran-Astara area, cups of this capacity were also used to salt fish, but they were made without handles. In the Sheki zone, where they made many different pickles, they also used the cups. For example, in some villages in the Lankaran area, turnips were salted in such jugs. They had two handles. 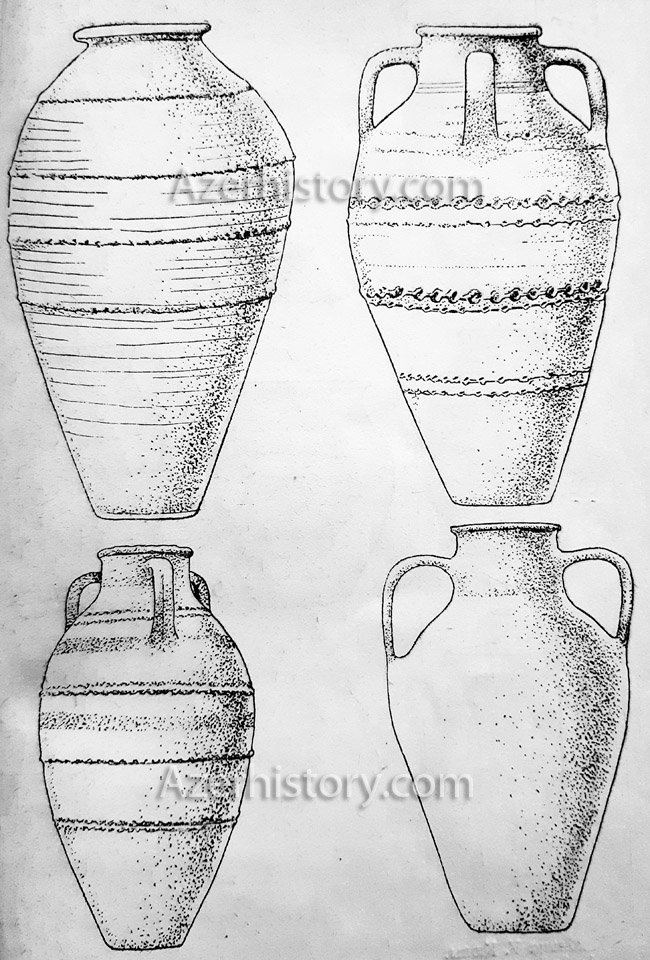 Numerous archeological excavations in Azerbaijan have revealed a jar of various sizes, decorative and construction techniques. For example, excavations on Sarytepe Hill in 1960 revealed large household kyups – barrel-shaped, flat-faced with a rim and narrow mountain with a wide crown bent outwards.

The abundance of kyups in various historical periods indicates that their production was massive and since the time of the craft they were accessible to the general population. The mass production of objects of this type confirms the use of kyupas as burial vessels.

At the end of the XIX – beginning of the XX century. Ceramic tableware was not widely used in Azerbaijan. These included table bowls, mugs, butter dishes, salt shakers, teapots, saucers, sugar bowls, often covered with water. 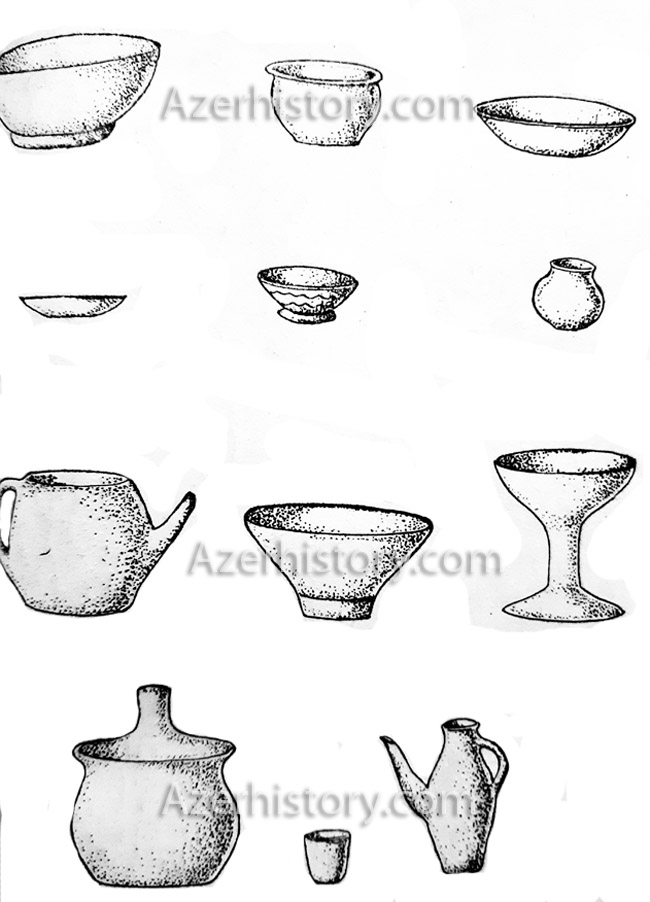