EVENT ANNOUNCEMENTS FOR MAY 8

– at 16:00, in front of the X-fit Dushanbe sports complex (24/2 Mukhammadieva St.), a unique “Victory Waltz” action will take place: Dushanbe residents, along with professional dancers in the form of the years of war, they will be able to dance waltzes, as their relatives did in May 1945.

– from 10:00 to 18:00 in the garden of Dushanbe Serena Hotel will host the festival “City of Masters”. This is a handicraft exhibition, as well as master classes for every taste: painting, jewelry making, knitting, embroidery, dot painting, cyanotype, origami, etc.

In addition, attractions and various games, street art, photo zones and food court from the hotel are waiting for you! Admission: adults – 20 somoni, children under 14 years – 10 somoni.

1996 – The International Monetary Fund has approved the first $ 22 million loan to Tajikistan.

2004 – A Department for Combating Extortion, Abduction and Trafficking in Human Beings has been opened under the Ministry of Interior of Tajikistan.

2012 – IRPT chief Muhyiddin Kabiri called on the president to grant amnesty to participants in the country’s civil strife.

2015 – Lev Sir and the lion Deal became the mascots of the national team of the Football Federation of Tajikistan in the qualifying round of the 2018 World Cup.

2019 – Tajikistan holds the chairmanship of the OSCE Forum on Security Cooperation.

2020 – Humanitarian aid was delivered to Dushanbe by a military transport plane of the Ministry of Defense of the Republic of Uzbekistan and 8 Uzbek virologists and epidemiologists with experience in the fight against coronavirus arrived.

2020 – In India, on behalf of the mayor of the capital, Rustam Emomali, the Tajik pharmaceutical company “Orienpharm” bought medicines delivered to Dushanbe by the airline “Somon Air”.

1912 – The hero of the Soviet Union was born Saidkul Turdyev.

2020 – Nuriddin Makhmudov, brother of the former speaker of the upper house of the Tajik parliament, Makhmadsaid Ubaidulolev, has died in Dushanbe.

IMPORTANT EVENTS ON MAY 8

The aim is to join forces in the fight against the new challenges and to do everything possible to resolve all disputes by peaceful means and in a way that does not endanger international peace and security.

In the middle of the 19th century, on Dunant’s initiative, volunteer groups began to be formed for the first time, providing assistance to the wounded on the battlefield. And in 1863, on his own initiative, a conference was convened that laid the foundations for the International Committee of the Red Cross.

Currently, Red Cross and Red Crescent workers and volunteers work in almost every country in the world and use the opportunity to call on people to step up humanitarian action to support the most vulnerable sections of the population and the victims of various accidents. disasters. natural disasters and armed conflicts.

May 8, 1945 on the outskirts of Berlin Karlshorst at 22:43 CET (May 9 at 0:43 Moscow time) The final act of unconditional surrender of Nazi Germany and its armed forces was signed.

The official signing of the act took place under the chairmanship of General Zhukov and the signing ceremony itself took place in the building of the School of Military Engineering, where a special room was prepared, decorated with the state flags of the USSR, USA, England and France. At the main table were representatives of the allied forces. The hall was attended by Soviet generals whose troops occupied Berlin, as well as journalists from many countries. 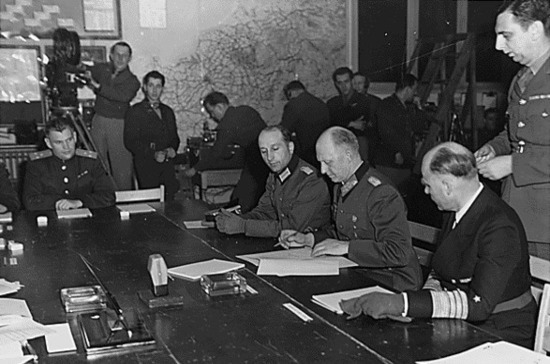 Following the unconditional surrender of Germany, the Wehrmacht government was dissolved and German troops on the Soviet-German front began to lay down their arms. In all, between May 9 and May 17, the Red Army captured about 1.5 million enemy soldiers and officers and 101 generals in a surrender. Thus ended the Great Patriotic War of the Soviet people.

In the USSR, the surrender of Germany was announced on the night of May 9, 1945, and by order of Stalin, a magnificent salute of a thousand weapons was given to Moscow that day. By decree of the USSR Supreme Soviet Presidency, commemorating the victorious end of the Soviet People’s Great Patriotic War against the Nazi invaders and the historic victories of the Red Army, May 9 was declared Victory Day.

73 years ago such a day in Berlin on the territory of Treptow Park tA memorial complex was solemnly unveiled to Soviet Army soldiers who fell in the battles against fascism.

In memory of the 20,000 Soviet soldiers who lost their lives during the occupation of the capital of Nazi Germany, three monuments were built in Berlin at the end of World War II. These monuments are not only monuments of the Great Victory, but also military burials. 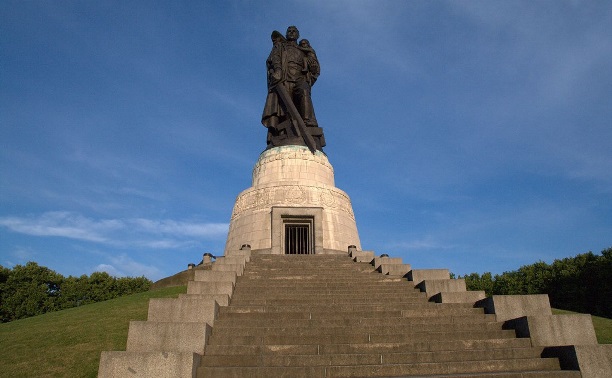 The monument in Treptow Park, where about five thousand Soviet soldiers are buried, is the largest and most famous of these monuments in the world along with Mamaev Kurgan in Russia.

May 8, 1967 The inauguration of the monument to the architectural ensemble “Tomb of the Unknown Soldier” near the Kremlin wall took place in memory of the heroes who died during the Great Patriotic War. The Eternal Flame of Glory lit up the tomb, which erupts from the middle of the bronze star. It was lit by the flame of the Eternal Flame at the Field of Mars in St. Petersburg.

An inscription is engraved on the granite slab of the tombstone: “Your name is unknown, your achievement is immortal”. 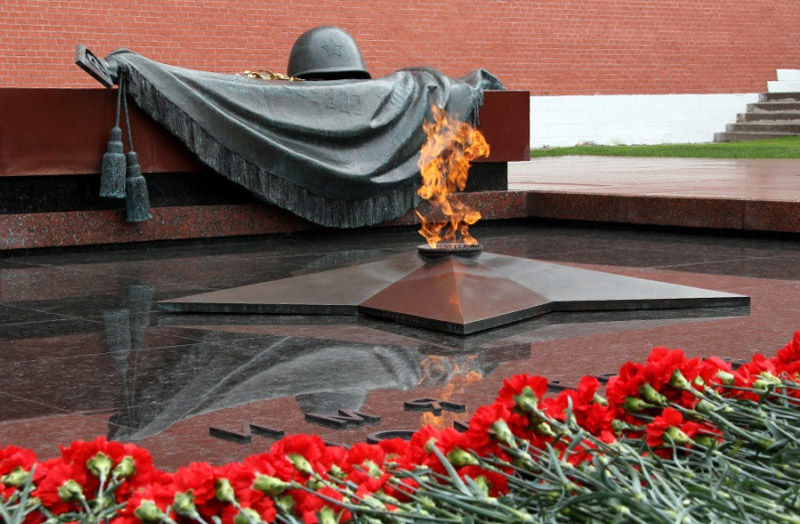 On December 12, 1997, by decree of the President of Russia, a permanent honorary guard No. 1 was installed in the Eternal Flame at the Tomb of the Unknown Soldier. The guard is made by the fighters of the Presidential Regiment. In November 2009, the monument received the status of National Monument of Military Glory. According to the document, the entire architectural ensemble was included in the list of “particularly valuable cultural heritage objects” of Russia.

WEATHER FORECAST FOR MAY 8