November is the end of the autumn tourist season in Baikal. At this time, fewer people want to see the lake, the low season is coming. But even in November, Baikal has its own charm. If in summer you can dive in the waters of Lake Baikal and swim in its warm bays, enjoy the summer nature, in winter you can see the beauty of the frozen lake with its amazing transparent crystal ice, then in November you can feel the warmth of Baikal. Right now, the lake is releasing the heat that has accumulated during the summer and if you approach the water’s edge, you will feel the warmth that comes from Baikal even on a cold and stormy day.

Many will find this period not very attractive for tourism, but there is still the opportunity to ride a boat and see the autumn lake and the surrounding landscapes.

In November, the surface of Lake Baikal looks rougher. Above the Khamar-Daban mountains, it is most often cloudy. But even now, a walk along the coast will bring great pleasure, you can breathe the fresh air of Baikal, listen to the sound of surfing and dream of new encounters with Baikal. 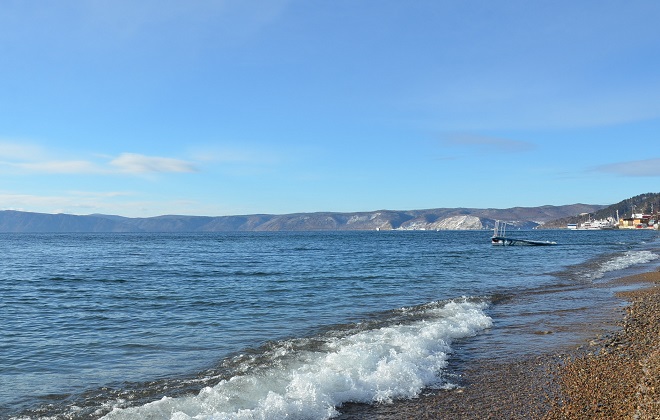 Fluctuations in water level have been occurring recently in Lake Baikal. This November marked the highest level in the last 6 years – 456.89 meters in the Pacific elevation system, while in previous years there was a low lake water level, which raises concerns about the ecological balance.

The night air temperature in November of this year is negative. The first decade was warmer (0 − −15), gradually the background temperature dropped to the limits of −5… −20. It is colder in the north of the lake, in Nizhneangarsk. A warm place on Lake Baikal in November was Bolshoy Ushkany Island. Air temperature at night in November 2018 in various parts of Lake Baikal. © Gismeteo 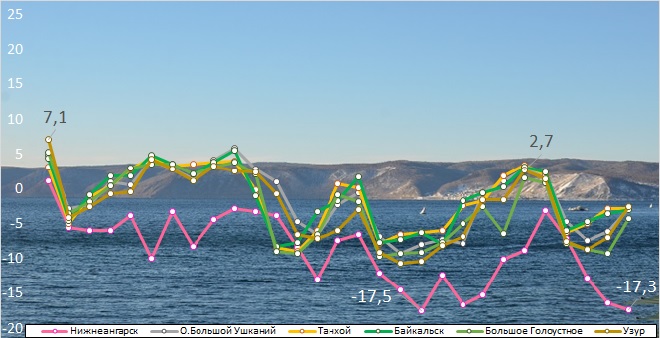 Air temperature during the day in November 2018 in various areas of Lake Baikal. © Gismeteo

The weather in the south of Baikal is usually warmer than in the middle and north of Baikal. The average air temperature in November this year was -6… -8 degrees.

In Tankhoi, the average temperature of the month is 6.1 degrees, the amount of rainfall per month is 25.6 mm, the snow cover at the end of the month is 13 cm. Strong wind (18 m / s) was observed on November 25.

In Bolshoy Goloustnoye, the average temperature was -7.7, the amount of rainfall was only 1.7 mm and there is still no snow cover here.

On the island of Bolshoi Ushkany, the average monthly air temperature was -3.3 degrees and the rainfall was 6.4 mm. On November 26, a wind speed of 26 m / s was recorded. Snow fell here on November 14 and its height was 6 cm. In Uzur, the average monthly temperature is -6.2 degrees, the amount of rainfall is 4.7 mm and the maximum wind is 24 m / s. The snow cover in Uzur was placed at a height of 4 cm, but on November 13 it melted and re-formed on November 29 – at a height of 7 cm. According to the Solnechnaya meteorological station, the maximum wind speed was 29 m / s.

North of the lake: the average temperature in November was within the normal range (−11.2 degrees), the rainfall was 16.2 mm, stable snow cover was created from the beginning of the month, at the end of the month the snow depth was 19 cm . 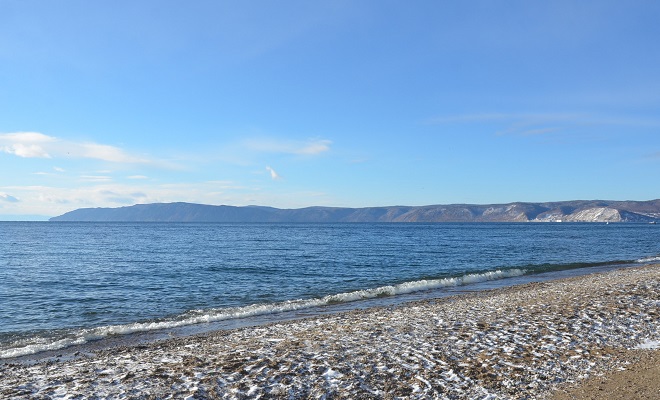 The new winter season and the influx of tourists will begin when the ice begins to form in Baikal, and this usually happens in January. Lake Baikal will be under the ice until April.