Tashkent, Uzbekistan (UzDaily.com) – IPMI experts assess CO2-eq emissions. from the production of animal products. In 2020, emissions from meat production in the Republic of Uzbekistan amounted to 123.9 million tonnes of CO2 equivalent.

With the introduction of industrial animal husbandry, meat production has tripled in the last 50 years. According to FAO figures for 2020, there were more than 1.5 billion cows, 1.3 billion sheep, 1.1 billion goats, 952.6 thousand pigs, 450.3 thousand turkeys and 33.1 billion chickens worldwide. and meat production amounted to about 340 million tonnes. By 2050, global meat consumption is expected to increase by 76%. In this case, without reducing the production and consumption of meat and other animal products, it will be almost impossible to achieve the goals agreed in Paris, in particular, to keep the global average temperature rising well below 2 degrees Celsius and the efforts limiting the temperature rise to 1.5 degrees.

How do emissions from different foods compare?

There are several ways to assess the relative impact on the climate of different food groups. This material uses data from the largest meta-analysis of global food systems by Joseph Poor and Thomas Nemechek (2018), published in the journal Science. This study looked at data from more than 38,000 commercial farms in 119 countries.

The following diagram (Figure 1) compares the average greenhouse gas emissions per kilogram of different foods. Thus, in the production of 1 kg of beef, almost 100 kg of CO2-eq. Lamb emits just under 40 kg CO2-eq, while farm-raised shrimp and pork emit 26.87 and 12.31 kg CO2-eq. respectively. 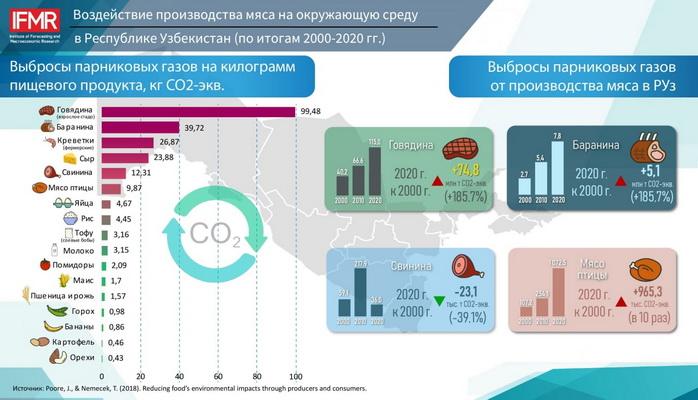 The resource-intensive nature of cattle farming also explains why, on average, cheese and other dairy products have higher climate costs than pork and poultry. In addition, chickens and pigs are not ruminants and therefore do not produce as much methane, which has a global warming potential 30 times stronger than carbon dioxide. Compared to meat and dairy, plant foods have a much lower carbon footprint. On average, emissions from plant products are 10 to 50 times lower than those from animal products.

According to the State Statistics Committee of the Republic of Uzbekistan, more than 2,000 tons of meat (live weight) are produced annually in Uzbekistan. In 2020, the production of beef amounted to 1,925.9 thousand tons, sheep and goats – 394.8 thousand tons, pigs – 3.9 thousand tons, poultry – 181.1 thousand tons. Using the average greenhouse gas emissions, we find that by 2020, beef production alone emitted more than 110 million tonnes of CO2 equivalent. In general, for 2020, emissions from meat production amounted to 123.9 million tonnes of CO2-eq. Compared to 2000, greenhouse gas emissions in 2020 increased by almost 3 times. And although emissions from poultry meat have increased 10-fold since 2000, this type of meat causes far less environmental damage than beef and lamb. In general, in the structure of greenhouse gas emissions for 2020, the largest share belongs to the production of beef – 92.8%, lamb – 6.3%, poultry – 0.87% and pork – 0.03%.

Scientists are constantly stressing that in order to avoid dangerous global warming, it is necessary to reconsider eating habits. However, do not go to extremes and immediately switch to a vegetarian diet. Either way, animal products contain more nutrients per calorie than vegetarians. Therefore, it is very important to choose the right diet. In addition, meat is an important part of history, traditions and culture, and meat dishes have become a manifestation of the cultural identity of certain regions and peoples. Just replace the “greenhouse” product with a more environmentally friendly one at least once a day and this will help keep the Earth green.

In the future, experts from the Institute for Forecasting and Macroeconomic Research will analyze greenhouse gas emissions according to changes in consumer eating habits.