In fact, the idea behind this report was diametrically opposed. Against the background of the shortage of new cars in Russia, due to which dealers “click” astronomical amounts in the official price lists, we decided to see this shortage with our own eyes.

It’s pointless to go to car dealerships now: there are enough cars in the windows so that no one can take completely gloomy pictures to the customers. Another thing is the customs terminals and distribution centers, from where the cars are delivered to the dealers. There has to be a rolling ball right now, right? So we went for pictures of completely empty giant parking lots – but we found them full.

How we calculated the number of cars

Each of the sites is visible from satellite imagery on Yandex and Google maps. The old photos date back to 2021 and 2020, but the basic layout of the parking lots has not changed. The calculation method is simple, but quite accurate: we take the number of cars standing in a row in the picture, then we count the rows in a specific part of the territory and extend the result over the whole area. These are approximate estimates with a deviation of no more than 10-15%, that is, the overall picture can be presented with great accuracy. The sites themselves are clearly visible from end to end: it is clear that they are now completely or almost completely full.

Before going into details, an important caveat must be made. The photos do not show storage facilities, but logistics nodes through which there is a continuous flow of cargo. They do not belong to specific car companies, so their content can (and should) change significantly in a matter of weeks or even days: a lot has arrived, which has been sorted by carriers – accept the next one.

However, rough estimates suggest that about 30,000 cars are currently concentrated at four terminals near Moscow, despite the fact that 32,706 cars were sold across the country last April. And we do not consider warehouses in other parts of Russia, as well as stocks at the disposal of the final representatives. In other words, the good news is that there are no terrible scars yet. The bad news is that there are not many options.

Geely instead of Mercedes-Benz 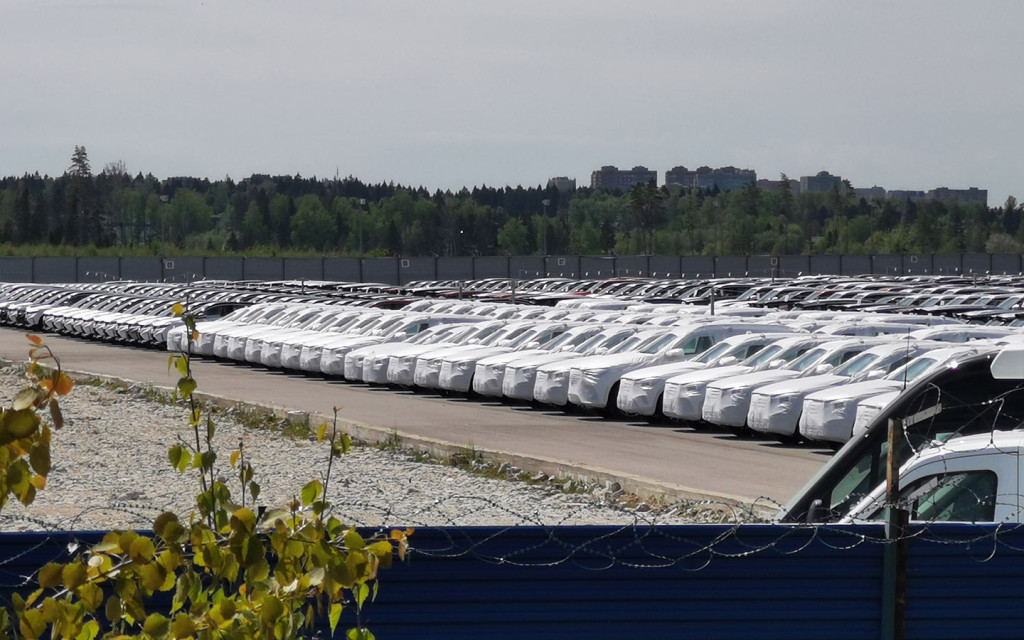 In the spotlight – it looks like one of the last Mercedes-Benz cars to arrive at Russian dealerships. These are mostly GLC crossovers, although you can also see the large GLS and E-Class sedan.

The first site visited is mainly used by Avilon and Mercedes-Benz’s logistics department. Once upon a time, hundreds and thousands of premium cars in genuine packaging could be seen here – and not just with a three-pointed star. A certain number of Mercedes remains today, but it is just a drop in the vast Chinese sea.

The vast majority of the area is occupied by Geely crossovers – above all there are compact Coolray, but older Atlases are enough. Look at the satellite image: the area completely occupied by the “Chinese” is marked in red, the cars of other brands are marked in green.

According to a rough estimate, we are talking about at least three thousand new Geely, waiting to be sent to dealers. This is half of the total volume of cars that the company was able to sell in Russia from January to April 2022, that is, this batch should be enough for at least a few months. Even without taking into account the warehouses of the dealers. And if the market continues to drop its record, then Geely has almost a year to offer on the site: in April, the brand was able to sell only 433 cars.

Decommissioned carsharing instead of brand kaleidoscope 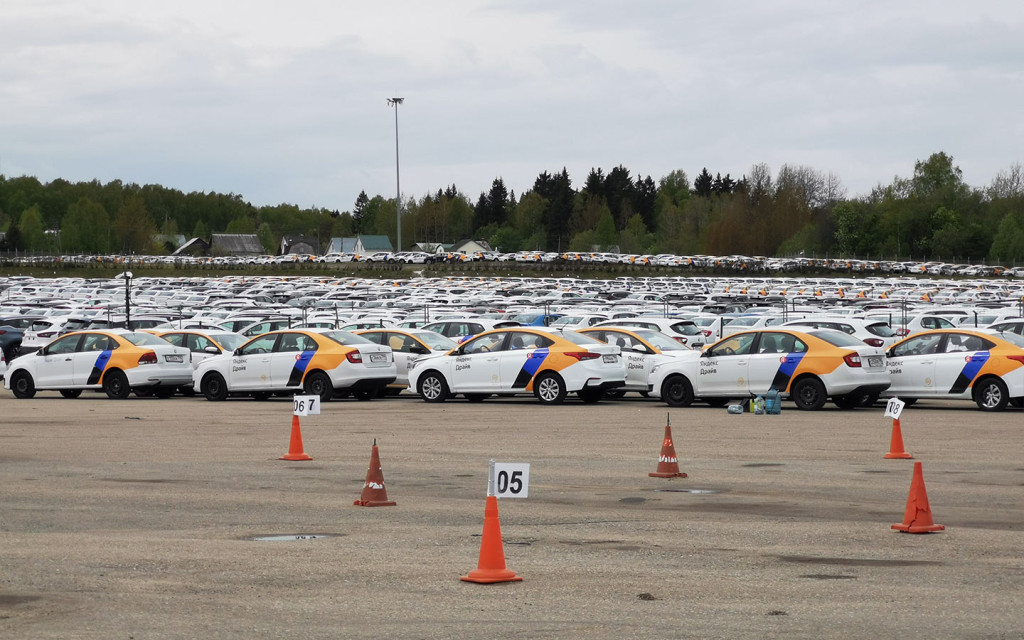 By eye, there are at least half of the cars sharing cars here. The rest, with the exception of the small inclusions, are the Renault Logan and Sandero, which are no longer produced in Russia. At least in the near future.

The second facility was once the main warehouse of the large multi-commercial company Major Auto, and now the site with a capacity of about 8 thousand cars is full of decommissioned Yandex.Drive carsharing. Basically, these are the economical Polos, Rapids and Solaris, although there are also premium Genesis G70. In the midst of all this, you can see several charred boats, and the praiseworthy guards themselves crossing the area in a Volkswagen sharing a car. 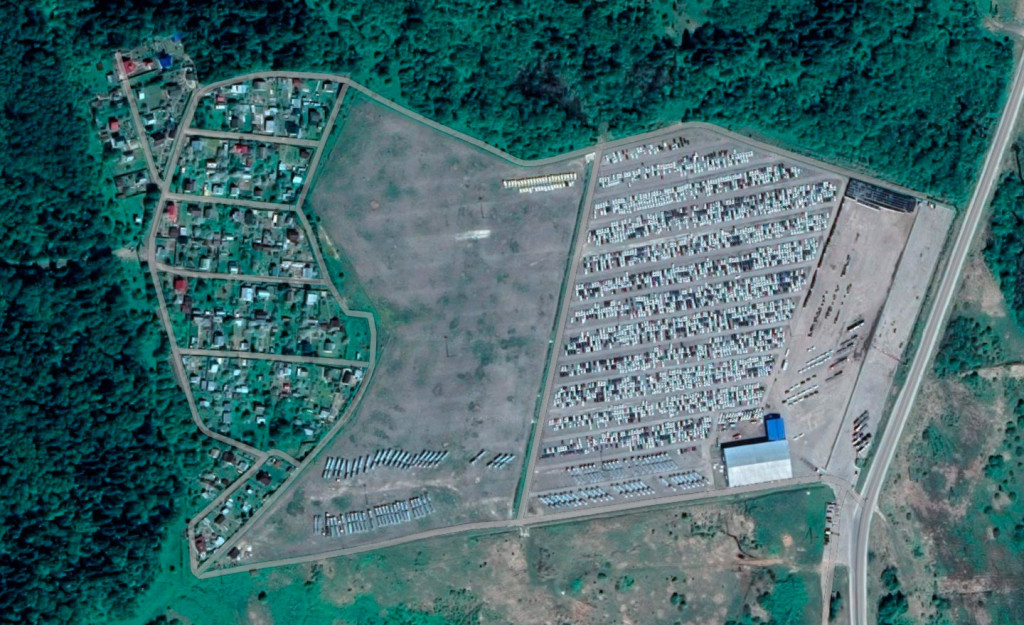 A satellite image shows that this car park may not have been completely full before, but it stood out from a variety of car colors and sizes. Now – a homogeneous white sea from end to end.

Embellished with pasted public cars are the pristine white Renault Logan and Sandero. It is not clear whether the same fate awaits them or whether these copies are intended for delivery to customers. There are also rare inclusions of new Chery crossovers that have not yet appeared in Yandex Park. In general, they all look more like a car graveyard than a functional terminal – and enhance the impression of dozens of large inactive carriers.

“In the past, there was almost everything that could be found in the living rooms,” says the social worker. – The image began to change in the era of the pandemic and now what appears is transmitted directly to the dealers: the point in the storage space has disappeared. On the other hand, in 2014 there were practically no cars at all, so at least some variety.

Kia for every taste and color