The main wealth of Primorsky Krai is its amazing nature. Virgin forests, picturesque hills, the coast of the Sea of ​​Japan, the centuries-old Ussuri taiga, etc. In the area there are 6 shelters and 3 national parks with unique flora and fauna. There is even a marine sanctuary, its waters and coastal areas inhabited by more than 5,000 species of flora and fauna.

At the same time, in Primorsky Krai, there are many leisure centers that allow the traveler to enjoy a comfortable outdoor recreation. Take a break from the hustle and bustle of big cities, swim in the Sea of ​​Japan. In particular, the recreation centers in the village of Andreevka are suitable for tourists.

By the way, in addition to nature, in the Primorsky Territory, travelers will also be able to get acquainted with historical monuments – the legendary fortress of Vladivostok, the ruins of the Voroshilov battery on one of the islands, an underwater museum, a pre-revolutionary naval museum And much more.

As for Andreevka itself, there are horse and hiking tours, diving, fishing, boat rental and jet skiing for holidaymakers. But in Andreevka there are also monuments of history, culture and architecture.

More about each of them –

The defense house was built in 1918-1919 using defensive fortifications technologies to protect against attacks by Hunghuz armed gangs (they killed the wife and workers of Governor Fridolf Gek, MI Yankovsky’s comrade and neighbor in Sidemi, Gek’s little son disappeared without trace) and not without the influence of the architectural and construction techniques used in the construction of the structures of the Vladivostok fortress according to the work of 1910.

The architecture of the house can be defined as a stylization that looks like a castle with Art Nouveau elements, the dominant architectural trend in the development of Vladivostok at that time. The architect is the eldest son of M.I. Yankovsky, Alexander Mikhailovich Yankovsky (1876-1944). The house is built of concrete with local beach pebbles. The foundation, the ground floor and the terrace are made of huge hewn stones. The ramparts of the entrance tower and the upper part of the building were not just decorative elements of a building stylized as a castle, but had a defensive function, as evidenced by the rounded inner corners of the ramparts, which increased the firing area.

In addition to the unusual architecture, the house attracts with its organic integration to the picturesque sea coast of Gamow, forming an impressive architectural and landscape complex with its inherent magic of the place.

The house of Vladimir Shevelev – son of Mikhail Grigorievich Shevelev, once a very famous person all over the Far East. Vladimir Shevelev worked with Jan Jankowski and Karl Filipenko on the management of the rapidly growing Pine Rocks reindeer farm. When their business took off, Vladimir built this house for himself on the west coast of Vityaz Bay. 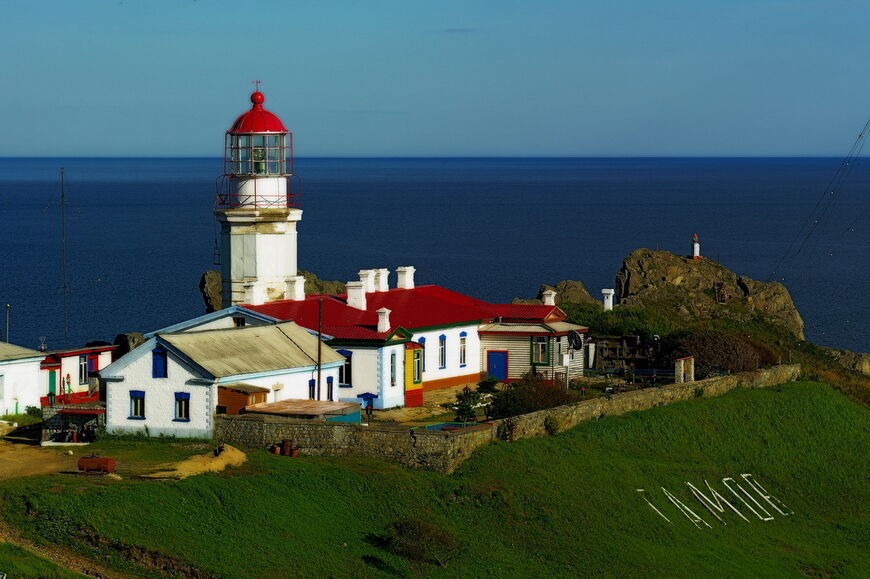 The most famous part of the island, which attracts the largest number of tourists, is the lighthouse. In the past, the rocks of the peninsula, with winds and fog, were dangerous for passing ships. The sailors even lit candles and prayed in chapels before embarking on their voyage across the peninsula. The most famous disaster that happened near the cape is the sinking of the steamer “Vladimir” in 1897. After that it was decided to build a lighthouse.

Gamow lighthouse is a sensitive object, it is difficult to get here without an excursion and appointment. In the area there is a museum-cafe, which stores things that have accumulated throughout the existence of the lighthouse. Lots of vintage and antique. For the convenience of tourists, bars and saunas are organized.

Arriving at the Gamow Peninsula, it is convenient to stay in one of the leisure centers – almost everything is located in the village of Vityaz. You can rent a hotel room or rent a holiday home. This place in Primorsky Krai is interesting not only as a lighthouse. The bays of the peninsula are loved by divers – and for good reason. The first is of course nature and the inhabitants of the underwater world. For example, the largest species of octopus lives here. If you are lucky, you can meet him while walking under water. Octopuses are strange but not dangerous.

You can support our media by donating any amount of money using the link provided or using the QR code. Donation Operator – CloudTips Service (by Tinkoff and CloudPayments).
With respect and gratitude, editor-in-chief Olga Nesnova.