The restaurant Vkhod s Ulitsa opened in the center of St. Petersburg, the first restaurant in Russia with a transit system for ex-homeless people: here you can try mimosa with tuna or Suzette pancakes and support the work of the charity Nochlezhka.

“Entering the street” – what is it?

The restaurant was opened by Nochlezhka, who since 1990 has been systematically helping the homeless in St. Petersburg. In Moscow, the NGO started working in 2020. The foundation has many relief projects: a rehabilitation shelter, counseling and legal services, a cultural laundry and more. Those in need are helped to restore paperwork, find temporary and permanent housing, work and simply wash and clean. In 2021, Nochlezhka helped 8,000 people.

The idea for the restaurant was coined by the former head of Nochlezhka St. Petersburg, Grigory Sverdlin, in 2018 during an internship in the UK, where he saw a cafe and a restaurant where former homeless people worked.

From the same year, Nochlezhka began working with the Hilton hotel chain. The company annually pays the NPO booths for studies at the College of Tourism for assistant cook, maid and other specialties and then conducts internships in its hotels. In addition, successful candidates have the opportunity to find work in a hotel. For the entire period, 13 people completed the internship, four were then able to start their careers at the Hilton.

“I had an idea to create a separate place where the homeless could be educated and then find further employment,” Sverdlin told Philanthropist. – But from 2018, we had other projects: we started a branch in Moscow and then the pandemic started. And only in 2021 we managed to return to our idea “.

How will the restaurant work and what is the employment transit system?

Those booths who have completed re-socialization projects in Nochlezhka and are now looking for work will be trained in the restaurant. According to Tatyana Bazhenova, the organization’s public relations specialist, re-socialization is a long process that is different for everyone: for someone it is enough to restore documents and return to their hometown, for someone this process takes years: get rid of addictions, work out of psychological problems, finding work and housing.

The internship will last 3-4 months, during which the former homeless will try themselves as a cook, waiter or bartender. It is expected that 15-20 booths of Nochlezhka will be able to undergo internships annually. Interns will receive a monthly grant of 20,000 rubles. At the end of the internship, participants will receive referrals and be able to find work at other restaurants. Several partner cafes and restaurants have already confirmed that they want to hire restaurant trainees. Among them, for example, a catering company of St. Petersburg and two cafes “Society of Clean Dishes”.

“The trainees did not go through any special preparation to go to work,” said Tatyana Bazhenova. “Rather, they were preparing themselves psychologically with our counselors, social workers and psychologists. They will see the whole “kitchen” of the public catering during the internship. Our practitioners are those who have re-socialization experience in Nochlezhka. We hire in the restaurant those who are ready to return to normal life. Unfortunately, a person straight from the street is not ready for this. We invite street customers to come to Nochlezhka, to start the process of restoring documents, finding housing and only then can we offer them internships in a restaurant “.

Now two trainees work in the restaurant: both men have completed re-socialization programs, live in NGO shelters and need work. In addition to them, the restaurant employs restaurant professionals: chefs, chefs, baristas.

“One of the trainees, Dmitri, came to Nochlezhka in 2018. Our social workers helped him do an internship at the Hilton. After leaving the process due to failure. In 2021, the man returned to us, settled in the Halfway House shelter for addicts. Now successfully undergoing rehabilitation for alcohol addiction, he has been sober for several years. “With the help of NPO staff, he is looking for a job, making contact with his family and has now agreed to do an internship at a restaurant,” said Tatyana Bazhenova.

Another task of the project authors is to break the stereotype for the homeless who do not want to work. All trainees have the necessary supporting documents, medical books, giving the right to work in the restaurant.

How did you open the “Entrance from the street”?

To open the restaurant, Nochlezhka allocated 6.5 million rubles from its own budget and another 2.6 million were raised in three months with the help of crowdfunding. Participants had access to various lots related to the future restaurant. For example, for a donation of 150 rubles, the philanthropist referred to the grain book in the restaurant “Handbook of Good People”, for 1800 rubles it was possible to subscribe to 10 cups of coffee. Also between the lots was the breakfast at the establishment, a personalized table and an always reserved seat in the restaurant.

One of these lots was also given to Nastya Zhvik, author of The Philanthropist, for his birthday by friends Polina Khlystova and Nikita Stupin. A nameplate in a restaurant cost 50,000 rubles. Nikita said why they decided to support Nochlezhka: 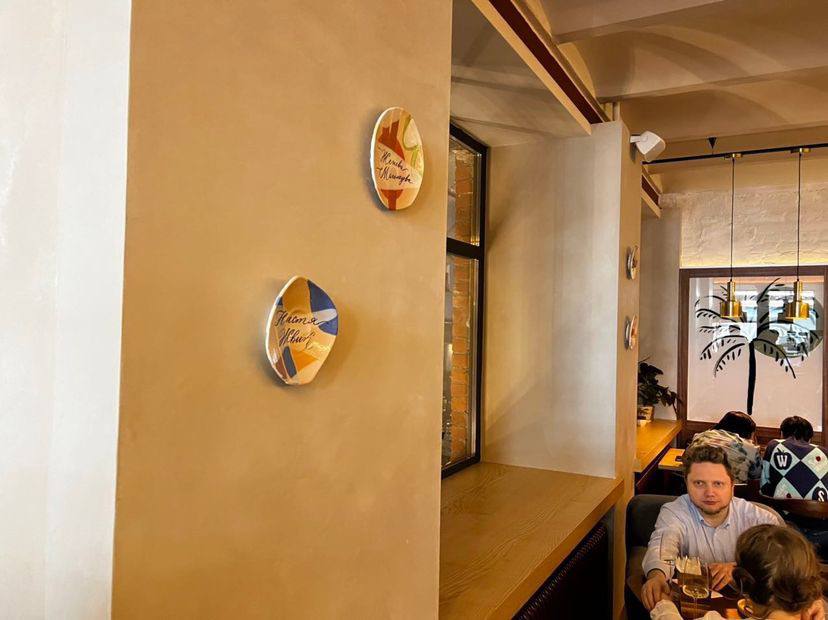 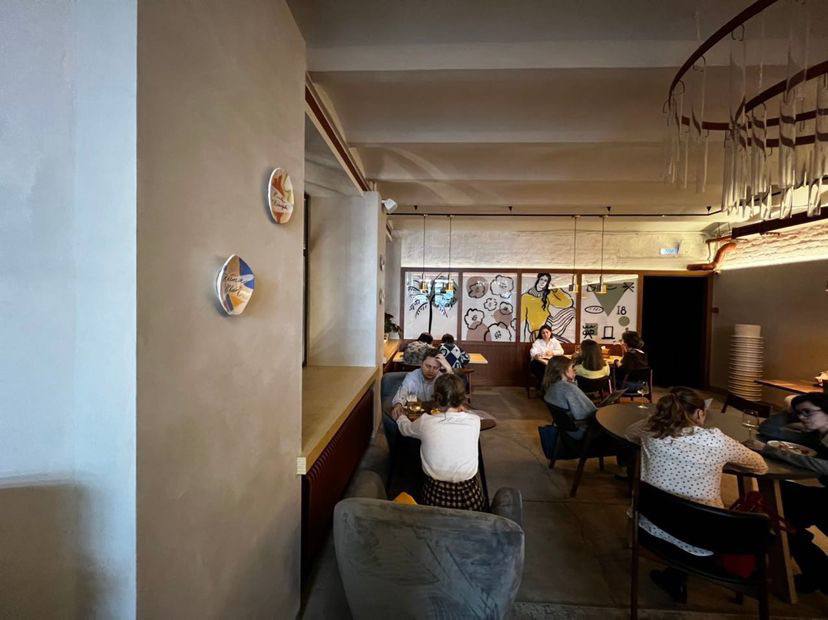 “I found it nice to support Nochlezhka because they do what few people do in Russia,” Nikita said. “There are vulnerable sections of the population in the country and they need help first of all. But few people help them because they can give little in return. I would like to live in a socially pleasant environment between kind and friendly people. They will only do so if their basic housing and food needs are met. Many NGOs, including Nochlezhka, work for this. I also like to share and see that it helps someone.

“It’s something so down to earth: if you want to feel good, make others feel good.” 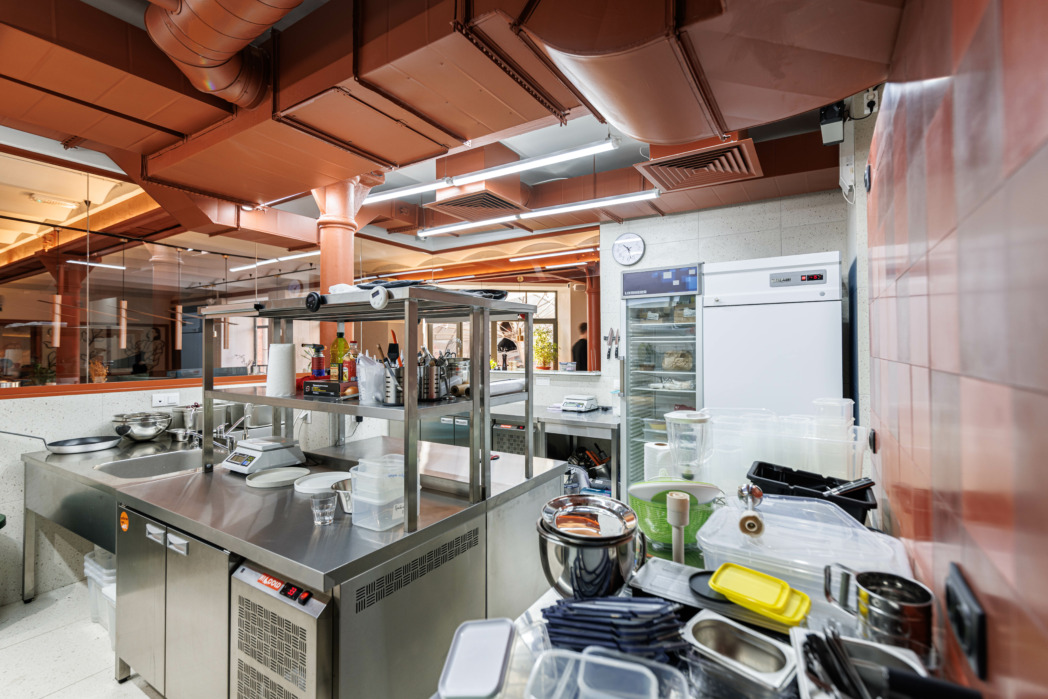 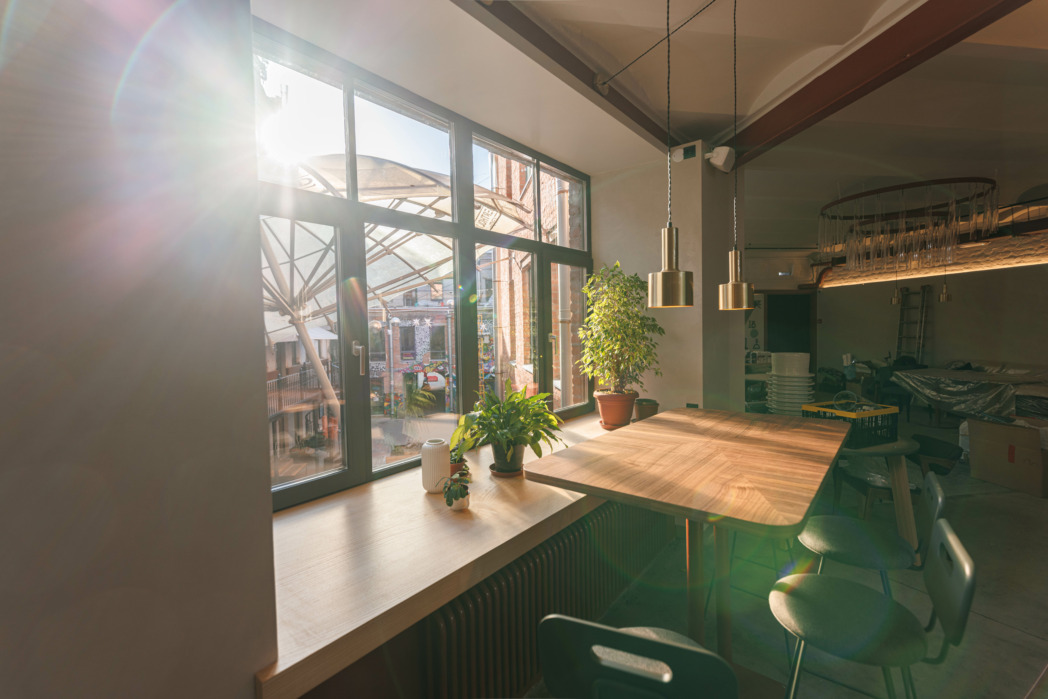 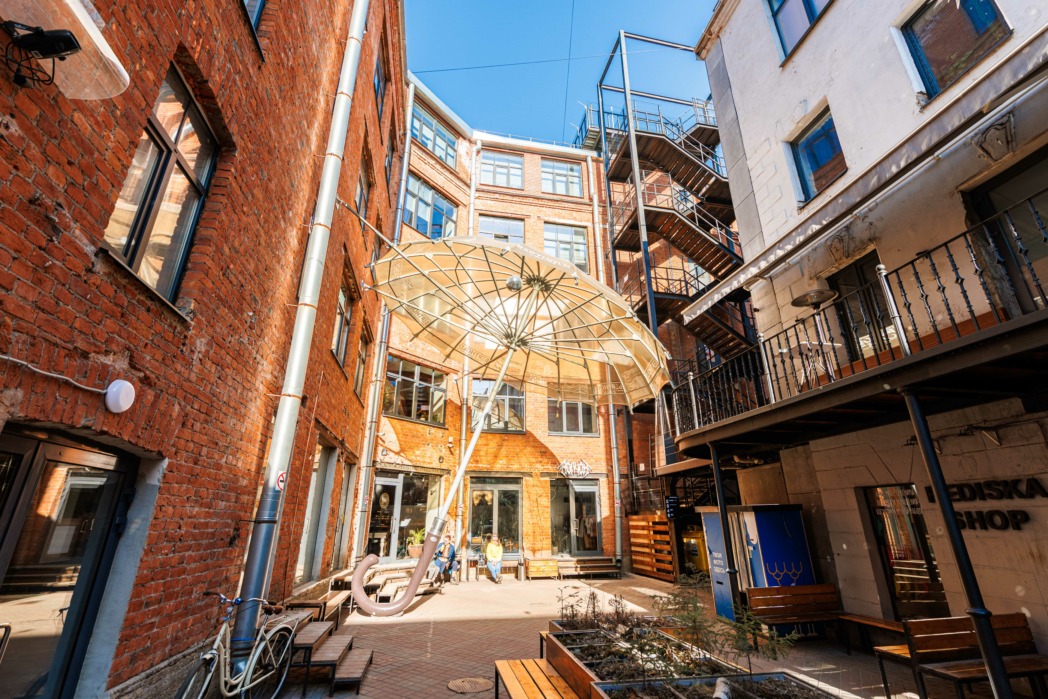 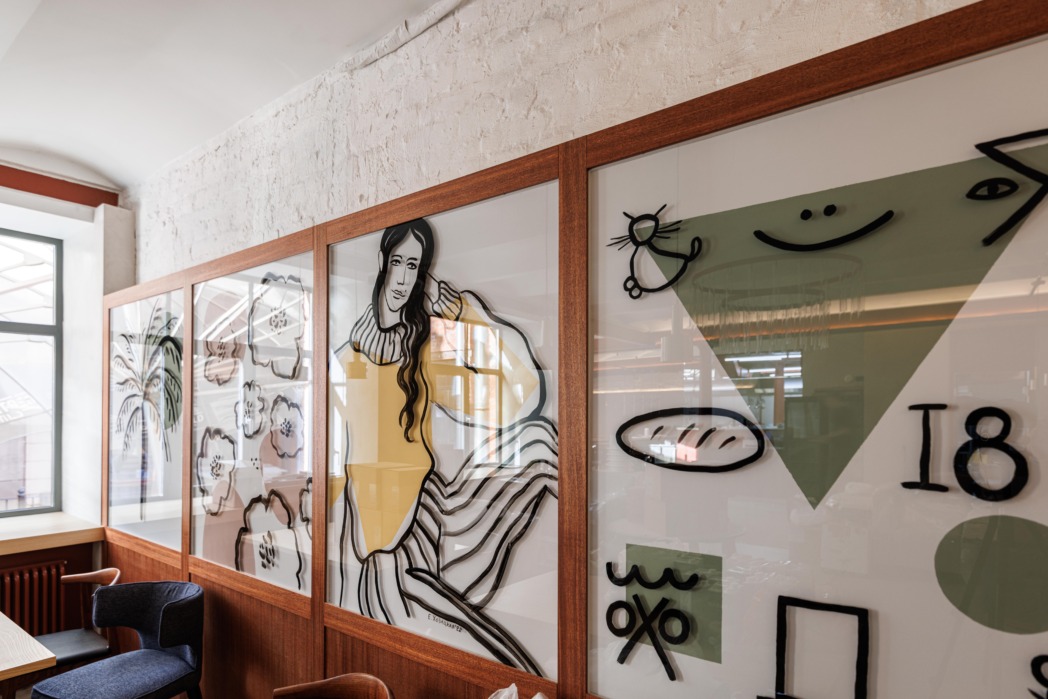 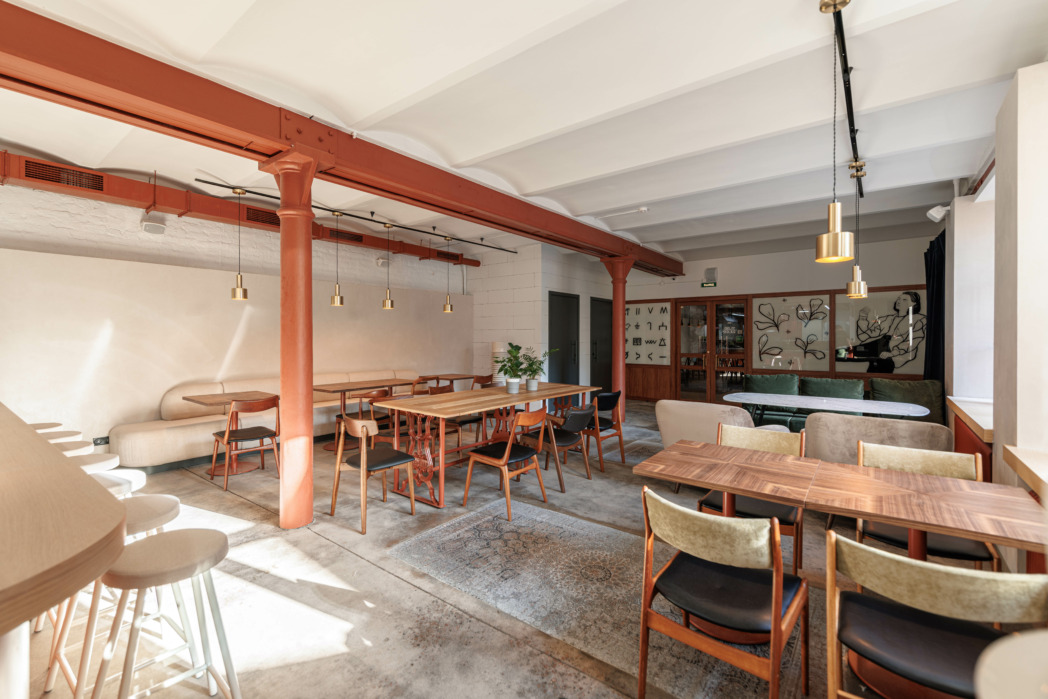 Where is the restaurant located and what is worth trying from the menu?

The restaurant “Entrance from the street” is located in the center of Bertgold at: Grazhdanskaya street, house 13-15. It is a modern cultural complex near the renovated Sennaya Square in St. Petersburg, where many young people and tourists gather, shops, cafes, office work, concerts and exhibitions. The café is open from 11:00 until 23:00.

According to Grigory Sverdlin, they were looking for places for a restaurant in a passable place, so that as many people as possible could visit the institution. “At the search stage, we were helped by professional restaurants who suggested where it would be best to open a place. We tried to negotiate preferential terms, but due to the situation with the economy, none of the owners was ready to provide us with benefits. “As a result, we rented the facility at market price,” Sverdlin told Philanthropist.

The restaurant with an area of ​​about two hundred square meters will be able to accommodate 50 guests at a time. Inside there is a comfortable room with a partially open kitchen. The organizers plan to hold events. The menu is simple, it includes classic dishes of Russian and European cuisine, including vegetarian dishes – bowls, soups with mushroom and tomato selection with eggplant, many hot dishes, pasta, salads, for example, authentic mimosa with tuna.

And also desserts – pies, Suzette pancakes, Count ruins cakes and more. The menu will be updated regularly. The average check in a restaurant is 750 rubles.

According to Nochlezhka plans, the restaurant will become self-sufficient four months after its release. All profits from the restaurant will go to the work of NPO projects. In addition, along with teams from other facilities in St. Petersburg, Vkhod s Ulitsa chefs will cook food for Nochlezhka’s works, which cater to the homeless – Night Bus, Heating Points and Night Shelter.

You can support Nochlezhka by following the link below.